What is Spygate? A Definitive Guide.

Do you think Spygate was about the Patriots secretly recording another team's practice? Perhaps you think that recording your opponent's defensive signals is illegal and an unprecedented display of organizational cheating? Either way, you're wrong, and this page is for you. 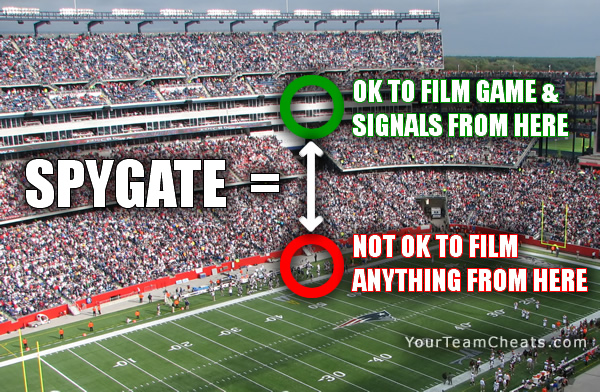 YOUR ELI5 SUMMARY OF SPYGATE

WHO: The New England Patriots (The Perps) and the New York Jets (The Perennially Hapless Victims, and I really mean perennially)

WHAT: The announced reason that the Patriots were punished was for filming their 2007 regular season game against the Jets from a sideline location instead of from an approved filming location (e.g. a press or media box). The actual reason was because they were told to do something by Goodell and didn't do it (more below).

The Patriots were not punished for filming the Jets defensive signals, as that has never been forbidden by the NFL. As of 2006, however, where you film the game and signals is limited to approved locations. Coincidentally, the Jets had done nearly the exact same thing a year earlier but were not punished, even a little bit, by NFL commissioner and former Jets public relations intern Roger Goodell.

WHEN: During the September 9, 2007 regular-season game against the Jets.

As punishment for filming the game from the wrong location, and for not following the new commissioner's guidelines on such, the NFL fined Patriots head coach Bill Belichick $500,000, fined the Patriots $250,000, and docked the team their original first-round selection in the 2008 NFL Draft.

YOU'RE WRONG IF YOU THINK: Filming you opponents' signals is prohibited by the league and is therefore a serious cheating infraction.

REALITY: Filming your opponents' signals is -- and always has been -- completely legal, even today. After a league memo to all clubs in 2006, however, you can't do it from a location where the team could potentially use it during the same game.

Every single NFL team films every single game they play from multiple angles. As they do this, are they supposed to locate and black out the one part of the stadium where the defensive coach is? Should it be a roaming dot if he moves? Obviously not, because the sidelines are just another part of the larger football field and game.

It should have been called WrongLocationgate or F*ckYouRogergate, because there was absolutely no element of spying involved.

Don't go on if you don't get this. Knowing that it is completely legal to film defensive signals is fundamental to your understanding of all Spygate scandals and why they are punished as a relatively minor offense on this site.

From the intro of the Wikipedia entry on Spygate:

WIKIPEDIA: "Videotaping opposing coaches is not illegal in the NFL but there are designated areas allowed by the league to do such taping. The Patriots were videotaping the Jets' coaches from their own sideline which is not allowed.

YOU'RE WRONG IF YOU THINK: Spygate was primarily about videotaping OR videotaping location.

REALITY: Spygate was a chest-thumping pissing match between Belichick and Goodell that Goodell was able to "win" by imposing an outsized fine as he fell back on his fainting couch crying "fair play" and "honest competition."

This is the text of the rule that Belichick broke:

Article 9.1 (C) (14) of the Constitution and Bylaws of the NFL (p 39 of this pdf): No member shall: "Use at any time, from the start to the finish of any game in which a club is a participant, any communications or information gathering equipment, other than Polaroid-type cameras or field telephones, including without limitation videotape machines, telephone tapping or bugging devices, or any other form of electronic devices that might aid a team during the playing of a game.” (Emphasis mine.)

First, notice that the rule doesn't mention filming of opponents' signals as that has never been prohibited by the NFL (see above). Next, note that the rule prohibits the use of videotaped material to aid a team "during the playing of a game."

Belichick argued that his videotaping was entirely for post-game analysis. In his statement announcing the Spygate penalties, Goodell actually corroborated that Belichick never used the filmed content to gain an advantage in the same game. Also, Patriots video man Matt Walsh, in his interrogation by the league had the following to say about how the sideline videos were used:

Q. So you’d finish the tape, then give it to him?

A. Yeah. There was no rush after I finished to get it to him right away. Because typically we wouldn’t be playing the team for months to weeks later on. So if it was a clean copy of the tape, in other words, I didn’t think it needed to be edited for anything, then I could just leave it on his desk that night. If for some reason, I thought it needed to be edited with an actual game tape, just so it would be a cleaner copy for him, then I would take the time in the next day or so to do that.

In the end, the funny thing about Spygate (aka "The Greatest Cheating Scandal In The History Of The World") is that Goodell effectively admitted that no rule was actually broken. This backstory gives more context to Belichick's statement after the penalties were announced:

"As the commissioner acknowledged, our use of sideline video had no impact on the outcome of last week's game. We have never used sideline video to obtain a competitive advantage while the game was in progress. Part of my job as head coach is to ensure that our football operations are conducted in compliance of the league rules and all accepted interpretations of them. My interpretation of a rule in the Constitution and Bylaws was incorrect."

Unfortunately for the Patriots, the technical breaking or non-breaking of the rule was not Goodell's big issue. Writes Ryan Sawtelle on his excellent take-down of Spygate: "Goodell and his office specifically told the teams NOT to do it – and that evil, insubordinate Belichick decided that he would stick to the rulebook – you know, the actual rule - and Goodell took that as a slap in the face to his authority. It was a battle of egos. That’s your “Spygate”. That’s what this entire circus was about. Horrifying. I know. People still think this is a scandal."

YOU'RE WRONG IF YOU THINK: The league is even authorized to change a rule by memo.

REALITY: The memo sent out by the NFL office was trying to change a rule that could only be changed by a unanimous vote from all 32 teams. That is the real reason Belichick disregarded Goodell's new order and continued to film from the sideline. Goodell did not have the authority to change the rule without a unanimous yes vote from the teams after the season was over at the annual owners meetings. [H/T YTC emailer Barry]

YOU'RE WRONG IF YOU THINK: The Patriots were caught filming their opponents' practices.

REALITY: Not even a little bit true, you are confusing your false accusations with this debunked one.

Spygate was solely about the Patriots filming their 2007 regular season game against the Jets from the wrong location. Later in that same season, The Boston Herald published a false charge that the Patriots filmed the St. Louis Rams' 2002 walkthrough practice prior to Super Bowl XXXVI. The paper later acknowledged its error and issued a front page apology for running the story without sufficiently verifying its source or the charges (page scan for posterity.)

NFL commissioner and former Jets public relations intern Roger Goodell, after meeting with Patriots video man Matt Walsh and 50 other people, cleared the Patriots of any wrongdoing saying that he found no evidence that the Patriots videotaped the walkthrough."

YOU'RE WRONG IF YOU THINK: The Patriots were the only team brash enough to film their opponents' signals.

REALITY: Because it is completely legal, all 32 NFL teams film games and signals for post-game analysis. You just can't do it from the sidelines and you can't use the footage to gain an advantage in the same game, just future ones.

YOU'RE WRONG IF YOU THINK: The league penalized the Patriots so harshly because of the severity of the cheating advantage gained.

Spygate was 99% about the league punishing Belichick for stubbornly not following the new 2006 rule about approved videotaping locations. Ray Anderson, NFL head of football operations, sent a memo on September 6, 2006 -- and a follow-up in 2007 -- saying not to film from certain locations, the sidelines being one of them.

Because the Patriots (and Jets, btw) continued to film from an unapproved location after 2006, NFL commissioner and former Jets public relations intern Roger Goodell, intent on solidifying his early reputation as a hammer of justice, came down hard on the coach and the organization to make sure league members would never again fail to respect his authoritah!

YOU'RE WRONG IF YOU THINK: NFL commissioner Roger Goodell destroyed the tape evidence before showing anyone because they contained additional damning information that he didn't want revealed.

REALITY: Goodell played the videos for reporters at the press conference when he announced his punishment. The reporters got to watch the footage on a repeating loop prior to Goodell stepping to the podium.

YOU'RE WRONG IF YOU THINK: Belichick admitted to Goodell that the Cheatriots had been filming illegally from the sidelines for years

REALITY: Prior to the 2006 memo from the league, it was legal to film from the sidelines. Of course, by now you know that at no point in time has it ever been illegal to film signals.

Think something should be added to this summary of Spygate? Is there a broken link? A fact that need clarification? Email The Commish (with supporting links) and he'll take care of it just as quickly and professionally as Roger Goodell would.